The Other Tower Hamlets Cemetery

Between the Belgian town of Gheluvelt and Bass Wood,  on the west side of a row of ‘pillboxes’, 36 soldiers from the United Kingdom who fell during the winter of 1917-18 were interred in a small temporary cemetery. The typical British ‘Tommy’ was fond of re-naming parts of these foreign fields after more familiar places back home, often because the original French or Flemish name was totally unpronounceable to them. The area of the Western Front near Ypres had been renamed by the British as ‘Tower Hamlets’.

After the Armistice the 36 men were exhumed and re-interred in the Hooge Crater Cemetery alongside 2,310 other casualties of the War.

While the conflict was still raging across the battlefields it was simply too dangerous and impractical to do anything beyond retrieve the bodies of the casualties when it was possible and bury them in the most convenient location nearby. Local churchyards were often used. Others were not retrieved as the ever present mud deposited by subsequent shell blasts would have hidden them.

Naturally the military authorities were more than aware of the urgent necessity to deal with the problem of decently burying the casualties. Nothing could be more disheartening or distressing to the fighting men than seeing the unburied dead around them. This became a serious issue during the winter of 1916 around Beaumont Hamel and soldiers returning home to Britain, injured or on leave, were complaining about the situation.

Initially it was thought that each Division should be responsible for the burial of their own men but as this would entail soldiers burying friends, brothers and cousins, which would be deeply distressing and might cause problems when a Division suffered heavy casualties and was then withdrawn from the front line, it was decided that separate burial parties would be detailed with the task.

At Tower Hamlets Lieutenant H. Knee was in charge of the detail who buried the 36 men who died during the winter. Orders had been received over the procedure to follow which included taking any personal items such as pay books, letters and watches from the soldiers and carefully storing them in small white bags which were to be securely tied and one of the identity tags attached. The other tag remained with the soldier. Lieutenant Knee described it as a ‘gruesome task’.

Once the Armistice came into effect on November 11th and the decision was made to not repatriate the bodies of the fallen, plans were put into place to rebury the casualties. The main priority was identified as the exhumation of approximately 160,000 isolated graves, followed by the concentration of smaller cemeteries into the larger ones we are so familiar with today and finally to locate and identify the estimated half a million ‘missing in action’. Details were decided at a conference on November 18th 1918 and the work began just three days later. 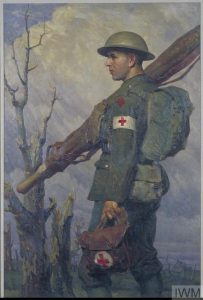 The work was physically demanding, especially when the weather deteriorated with frost eventually calling a halt to the efforts of the retrieval parties. It took 5 or 6 men to retrieve an individual body, transport it to the new cemetery and then rebury the soldier. Later this was increased to 9 men. Other difficulties resulted from the fact that burial spot were inaccurately marked and no graves were actually found at the spot indicated. The burial parties were told to look for rifles or a simple stake placed in the ground to mark a burial or discolouration in the grass or earth.

Volunteers were recruited from the different Divisions and were paid an extra 2 shillings and 6 pence a day. The Canadians offered to clear the Albert and Courcelette areas as well as Vimy Ridge, the Australians took responsibility for Pozieres and Villers Bretonneux while the British initially searched the Aisne and Marne areas for the dead of 1914 before the French took over.

In 1921 at Tower Hamlets a soldiers was found but the burial party was unable to identify him despite a careful search which involved ‘boots scraped and a coloured silk handkerchief examined’. The body was taken to the Hooge Crater Cemetery and interred under the direction of the Registration Officer.

By October 8th 1921 all military personnel involved in the exhumations had been demobilised and returned home. Bodies of servicemen have continued to be found, usually by the French and Belgian farmers cultivating the area, up until this year. In July 2016 Lance Corporal John Morrison of the 1st Battalion Black Watch was re-interred with full military honours at Woburn Abbey Cemetery, Cuinchy near Arras. He had been killed, aged 29, while trying to assist a wounded officer on 25th January 1915. His identify was confirmed from a service number engraved on a spoon found with him and a DNA test of potential family members.

It is quite likely that the remains of other casualties of the Great War will continue to be retrieved from fields in France and Belgium. Sadly some will never be identified or even found and will be commemorated solely as a name on a memorial.