Two huge stone blocks stand in the middle of Shandy Park, like a giant pair of dice rolled from on high. Their pitted surfaces attract moss and lichen, toddlers play hide and seek around them, and agile teenagers clamber to perch on top. But how did these enormous blocks come to be there? It was a question raised by Michelle Lindson, the Friends’ Community Development Coordinator who leads the Nature & Us project in Shandy Park. Intrigued, I set about researching their history. 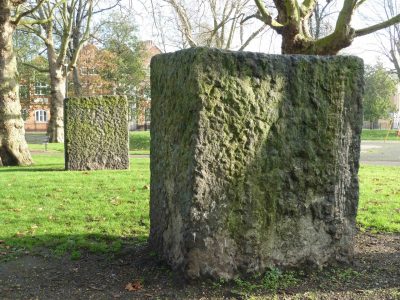 Shandy Park has been a park for well over a century – having been landscaped as a recreation ground by the Metropolitan Public Gardens’ Association in 1885 – but prior to that, the site was home to the East London Cemetery (before the contemporary one opened in West Ham). There’s little evidence today of the former cemetery, apart from a clutch of old headstones wedged against the northern wall.

Opened in 1837, the East London Cemetery – also known as the Beaumont Burial Ground – pre-dates both Tower Hamlets Cemetery (1841) and Victoria Park Cemetery (1845). They all formed part of the flurry of new cemeteries created to meet the increasing demand for burial space in early Victorian London, at a time when traditional churchyard burials were becoming impractical. Like the others, the East London Cemetery was set up as a private enterprise, seeking to attract customers: “…it is ornamentally planted with groves and shrubs, which afford a suitable accompaniment of foliage and flowers to the tombs, and commodious walks to the affectionate visitors to them… the approbation of the public is attested by upwards of 500 interments which took place therein last year. It is open for inspection every day, from one o’clock till sun-set.” (Morning Advertiser, 4 Oct 1838)

As the rather flowery language indicates, the garden cemetery movement was in full flow; burial grounds were being designed not only for the dignified repose of the dead, but also for the pleasure of the living. Perhaps the two stone blocks were intended as part of this landscaping?

Local landowner, John Thomas Barber Beaumont (1774-1841), had first devised a plan for the cemetery in 1836. As the Globe newspaper reported: “[Beaumont] is now erecting a chapel, surrounding it with a high wall, it being his intention to have the land consecrated as a public cemetery, similar to the Kensal Green Cemetery [opened 1833]; broad gravel walks are now in progress, and an immense number of young trees are about to be planted, and the whole will be tastefully laid out.” (Globe, 28 Sept 1836).

Barber Beaumont had a colourful career – as an accomplished portrait painter, army officer, financier and philanthropist – and he’s remembered in the naming of Beaumont Square, where he established the Beaumont Philosophical Institution. There isn’t space here to tell his life story but I’d recommend nipping into the foyer of the People’s Palace at Queen Mary University, where an enormous slab affixed to the wall is inscribed – rather like a giant cv – with his many achievements. We’ll re-visit the memorial slab later, but in the meantime let’s return to the pair of stone blocks. A further search online at the British Newspaper Archive (a remarkably rich resource for local and family historians alike) reveals several snippets about the arrival of two granite blocks in October 1836.

It must have been quite a spectacle, seeing two 15-ton blocks each being hauled by a team of 13 horses across London Bridge and through the East End, to be used for “monumental purposes” at the East London Cemetery. Bingo! I’d tracked down the stone blocks, or at least I presumed so. But, on further reflection, it didn’t quite stack up. Another report in the Manchester Times described the stones as being “in the form of a pedestal, about ten feet high and five feet square”, whereas the two Shandy Park blocks are almost cubic, about six feet all round. I decided to research further. 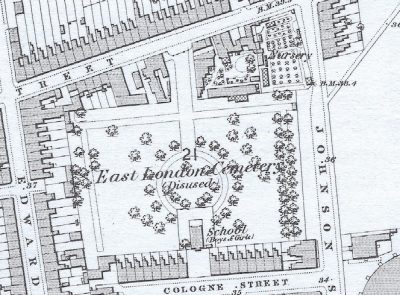 The first detailed Ordnance Survey map (1870) shows the layout of the cemetery. The two stone cubes are not specifically marked, but by overlaying a present-day map it appears that they sat either side of the main north-south entrance drive, just outside the central circular path. However, a 1900 map appears to show two stones in the centre of the circular path, around ten metres or so from the present-day location. Had these giant stones been moved since 1900? It seemed a little unlikely, given their sheer size.

Newspaper reports on the death of Barber Beaumont in May 1841 provide a few further clues:

“It is now three full years ago since Mr Beaumont caused a tomb to be prepared for himself in front of the chapel of the cemetery, two immense pedestals of granite pointing out the spot as the last resting-place of himself and family, and a tomb contiguous as that of his friend Dr Fellowes. With a somewhat eccentric spirit, Mr Beaumont also caused, about the same period, a coffin of beautiful oak to be made, and by his order to undergo the process commonly called “Kyan’s process for prevention from dry rot.” The coffin was then sent to Mr Urnaney, his undertaker, in whose possession it has since remained, till it was this week assigned to the melancholy purpose for which it had been so long provided. A very beautifully executed bust of Mr Beaumont, done at Rome some years ago, was also placed in the chapel of the cemetery two years ago, with a plain marble tablet beneath it, and it is said that an inscription was also prepared, which will now shortly be placed on it.” (The Sun, London, 21 May 1841)

One of his obituaries described Barber Beaumont as “a friend of the humbler classes”, but there was nothing humble about his burial. With such particular preparations, he clearly wanted to be laid to rest in some style, taking centre stage in the cemetery he’d designed. As the funeral report indicates, there were “two immense pedestals of granite pointing out the spot” of his grave in the centre of the circular pathway.

At this point, a dip into the London Picture Archive online helped clear up my confusion. A photo taken to show the view northwards through Shandy Park (1957) shows not one, but two pairs of stones; in the background of the photo you can just about make out the pair of stone cubes that had triggered my research, whilst in the foreground are two taller stone pedestals. The pedestals are topped with decorative carvings, and the left one is inscribed to indicate that Barber Beaumont’s grave “was 8 feet E from this stone”. You can view the photo here.

Discovering that photo certainly helped clarify matters. So, it was the arrival of these larger granite pedestals – and not the smaller stone cubes – that was reported in the newspapers in 1836. And these same pedestals were the ones marked in the centre of the 1900 Ordnance Survey map. What has become of them since 1957 is less clear, based on my research so far. The arrival of the other two stone blocks appears not to be documented, but it seems most likely that they were brought in around a similar time as part of the cemetery landscaping, used to mark the points where the entrance drive opened out to the circular pathway.

As a burial ground, the East London Cemetery had a relatively short working life; having opened in 1837, it closed for burials in 1853, eclipsed by the much larger Tower Hamlets Cemetery a short distance to the east. By the time of the 1870 Ordnance Survey map, the former chapel had been re-purposed into a school (and demolished by 1894). And in 1885, Barber Beaumont’s son allowed the cemetery to be re-landscaped as a public garden: “Laid out in neatly-gravelled walks, with rustic seats beneath the cypress and willow tress, and above all, beautifully laid out with the choicest of summer flowers, in the most artistic manner, by Miss [Fanny] Wilkinson, the honorary landscape gardener of the [Metropolitan Public Gardens] Association” it provided “a veritable oasis in the surrounding desert of poverty and wretchedness.” (East London Observer, 4 July 1885).

Many of the gravestones were, presumably, removed or repositioned as part of this re-landscaping. Barber Beaumont’s mortal remains were removed to Kensal Green Cemetery – where you can still see his finely sculpted table tomb, prominently positioned on the central avenue – but it’s less clear whether the other burials were left in situ or re-interred elsewhere. 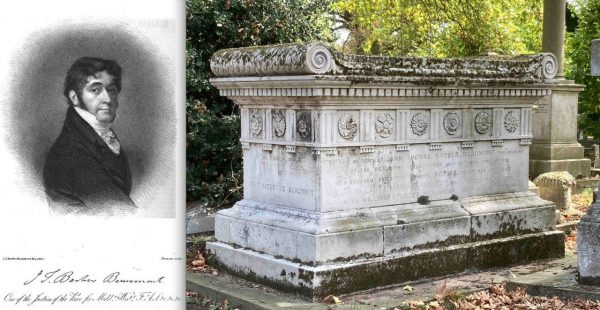 The enormous slab inscribed with Barber Beaumont’s attributes and achievements remained at the East London Cemetery – “fixed in the wall on the left of the Shandy Street entrance to the children’s portion of the Recreation Ground” (1912) – but was relocated to the foyer of the People’s Palace at Queen Mary University in 1979. That is indeed a fitting place for it to reside, as the People’s Palace had been made possible by funding from the Beaumont Trust and – in the footsteps of Beaumont’s Philosophical Institution – the People’s Palace continued to enable the “intellectual improvement, and rational recreation and amusement” of East Enders envisaged by his will.

To this day, the People’s Palace and Shandy Park remain as part of Beaumont’s legacy in the East End. Each time I pass them I’m reminded of his indomitable spirit, as captured rather dramatically on his memorial slab:

“His Ability, combined with singular Industry, Economy, and Perseverance, raised him to a state of honourable Independence, But, as he became Affluent he did not become Idle. His character, always Instinct with Energy, led him to prefer a life of useful Activity to one of inglorious Ease… May his Good Example be prolific of similar Glorious Deeds till Ignorance, Superstition, and Depravity shall Vanish from the Land!”

With thanks to the British Newspaper Archive and London Picture Archive.