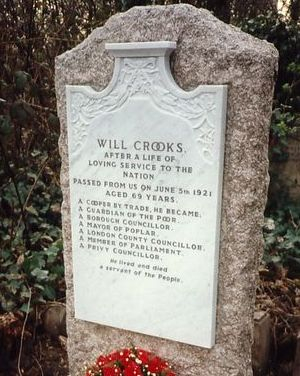 Will Crooks was born in a one-roomed house in Poplar, but went on to become a Labour MP in 1902 (the fourth ever elected) and grew into one of Britain’s memorable champions for political social change. People’s regard for this ‘servant of the people’, who had helped lead a major dock strike, had reformed the workhouse system, and supported reforms to limit the powers of the House of Lords transcended politics and class. He served as a Privy Councillor, and King George V paid a visit in 1917 during an illness of Will’s. Thousands flocked to Tower Hamlets Cemetery Park to pay their respects at Will’s funeral in 1921.

Our local archives have assembled a wonderful ‘life in photos’.

The procession to the Cemetery was captured in a British Pathe newsreel, here. 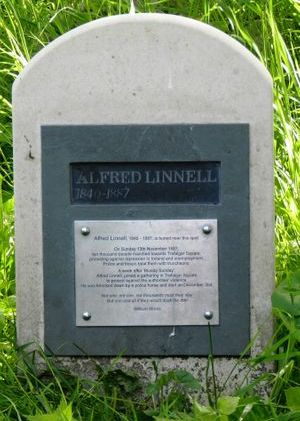 Labour Heritage commissioned a slate in honour of Alfred Linnell for the centenary of Bloody Sunday, November 1887. Alfred was a young Radical law-writer, and was caught up in the aftermath of one of the socialist demonstrations being staged at that time – a massive one centered on Trafalgar Square which was broken up with such violence by police that it became known as ‘Bloody Sunday’. During the following days of continuing unrest, Alfred was struck down by a police charge and had his neck broken under the hooves of a horse. In protest, thousands joined the funeral procession to Tower Hamlets Cemetery, where William Morris read a eulogy for Alfred Linnell: the ‘Death Song’.

Labour Heritage’s account highlights how so little is known of the person but in death thousands hailed him as ‘our brother and friend’.