Stories from the Cemetery – December 2020 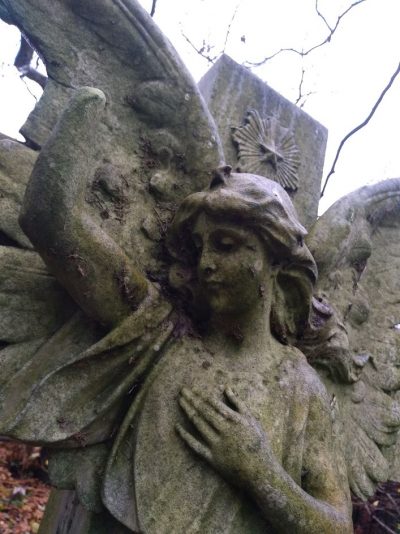 As the Heritage Officer here at the Cemetery Park, I am privileged to spend a good chunk of my time at work helping families track down their long-since passed relatives. These relatives found themselves at Tower Hamlets Cemetery Park once their lives had come to an end, and it is part of my role to help reunite them with their family, by working through our archives to match the burial numbers with the names and stories. With 370,000 people buried in the Cemetery Park there will always be more stories to uncover and each enquiry brings us a tiny bit closer to understanding the vast array of histories that belong to those residing here.

Every few months I will be sharing some of those stories with you, right here on our heritage blog. There will be stories of people from all across the world, from dockworkers and watchmakers to Music Hall singers and war heroes, all of whom you will find surrounding you as you walk the tranquil, woodland paths of Tower Hamlets Cemetery Park.

The last few months have been busy ones for myself and the heritage volunteer team, as enquiries have rolled in and research has continued on our book (more details on that coming soon). We’ve had to juggle ever-changing restrictions on work and volunteering as the Coronavirus pandemic raged on. Since I began in my role back in the middle of September, myself and the team have answered 55 grave enquires from people as far away as Australia and as close as Mile End Road looking for loved ones long gone. Thanks to all of our enquirers who have shared these stories with us, sadly all of them have rather sad endings!

Margaret (Mogs) Abbot was born to a Scots/Irish Traveller family in March 1878. The family worked the canals in the West Midlands but, as so many often did they eventually found themselves moving to East London. In 1894, just before her 16th birthday and with a few fibs told about her age, she married William Branton who was a few years older and living next door to the family. The pair quickly started a family and within months she was pregnant with the 1st of her 13 children. Many of her family suffered from TB, killing her mother and her 10-year-old son Henry and, eventually, it killed her too at the young age of 39 whilst two of her sons were away serving in WW1. Her husband William was killed 9 months later in a dock explosion leaving their 17-year-old daughter Julia to raise the surviving 5 siblings. Margaret is buried in a public grave, and sadly we have been unable to find a headstone for her. As headstones could be very expensive it is possible she was never memorialised, especially as the family had experienced so much loss in so short a time span.

Arthur Lovell was a costermonger (a seller of fruit and vegetables) before he volunteered to be a soldier at the beginning of WW1. He went out with one of the very first battalions in 1914. Despite being wounded twice he survived the war and returned home to his job as a costermonger. 10 years later Arthur was observing the 2 minutes silence at Armistice Day celebrations in Burgess Street, Limehouse. As the silence concluded Arthur noticed a young girl in danger of being hit by a lorry. In an act of selflessness, he snatched her away, putting himself in the way of the lorry as he overbalanced. He received a full military funeral and is buried in a private grave not far from the Westwood monument, his headstone now broken. You can find out more about Arthur over on the Cemetery Club website.

William Mitchell was an only child to a ship’s carpenter who served with the British army in India in the 1880s. Whilst serving his father was lost at sea and William took the news incredibly hard – he tried to cut his own throat when he heard the news. He was sent back to the UK to attend a lunatic asylum but for reasons unknown, he never arrived and instead met and married Margaret. According to his daughters, he rarely worked but despite depending on relief from Poplar Workhouse the pair had 12 children. William was also captain of the Bow Gasworks cricket team. He died in April 1935 and is buried in a public grave.

Elizabeth Fitzgerald and John Pickett were both buried in Tower Hamlets Cemetery Park in 1867. Elizabeth was born in Nova Scotia and spent many years in Ireland before moving to the East End of London. John was born in Northamptonshire and enlisted in the 3rd Dragoon Guards, a cavalry regiment. Both Elizabeth and John eventually went on to have their own children who separately emigrated to Western Australia. Several years later, John’s son Edward Pickett married Alice Fitzgerald, connecting the families. Despite never having met the pair now share great, great, great-grandchildren and are buried within a few feet of each other in public graves at Tower Hamlets Cemetery Park.

If you have a story to share, or would like help searching for a relative or loved one at Tower Hamlets Cemetery Park, please get in touch on heritage@fothcp.org.