Until Death Do Us Part: Symbols of Love in Places of Burial

Cemeteries and graveyards might not seem like the most romantic spaces, but symbols of love can be found almost everywhere in places of burial. From the funeral itself and the messages and symbols carved on the headstones, to the tributes left afterward, burial places are a constant reminder of the love that the living have for those who died. 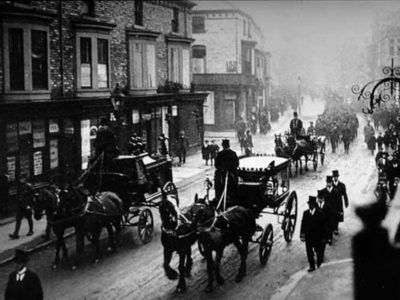 Whilst we often think of deaths and funerals for the grief and sadness that comes with them, they have long been filled with acts of love. When words are inadequate we often turn to rituals, traditions and symbolism to express these emotions of love and loss.

As burial spaces were cleaned up and reformed during the early years of Queen Victoria, mourning and funerary traditions became more extravagant, as new cemeteries such as the City of London and Tower Hamlets Cemetery (now Tower Hamlets Cemetery Park) offered well-designed, pleasant landscapes for “proper” and “decent” ceremonies to take place, rather than the squalid conditions of London’s overfilled churchyards. People from even the poorest communities would scrimp and save to ensure that their loved ones could avoid the cruel fate of anonymity in a paupers grave, and would often save towards a burial over paying for their own health care, or paying for a good education for their children, as Sir Edwin Chadwick commented in 1843.

For those who could afford lavish funerals, their ceremonies reflected the love of family and friends on a far grander scale than a simple burial. After the family washed and dressed the dead and placed them in their coffin or casket in their own homes, the caskets were usually left open to allow crowds of mourners to pay their respects and talk to and touch the deceased. The ceremony would usually also take place in the home. They would then be transported to the cemetery by horse and carriage (often decked out in full finery of black crepe and complete with plumes of feathers). Finally, six or eight of the nearest and dearest of the deceased would carry them to their final resting place.

These lavish funerals came at great expense and families often remained in mourning for up to two years which required a completely new mourning wardrobe at vast expense. It was considered bad luck (and bad taste) to keep mourning clothes for a second use. Today, funerals still act as expressions of love although the emphasis on the grand funeral as a show of love and devotion has been somewhat lost as time has progressed. 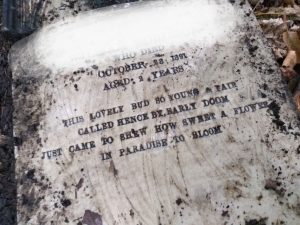 A beautiful poem on a headstone at the Cemetery Park

Once the burial had taken place, there is the headstone that is placed as an eternal memorial of love. Headstones declare the affection of those left behind for those who have passed away, for those who were lucky enough to be able to afford a headstone of course. The inscriptions found on headstones were often inspired by literature, poetry, and even song lyrics and they conveyed messages of both familial and romantic love as well as grief and sadness.

A lovely example of these messages can be found on the image on the left which depicts a parent’s sorrow for the loss of their 2-year-old son. It reads, “This lovely bud so young & fair called hence by early doom, just came to shew how sweet a flower in paradise to bloom.” These inscriptions remind us of the loving bond between the living and the dead. Other examples at Tower Hamlets Cemetery Park include, “Tis better to have loved and lost, than to never have loved at all”, and, “She’s gone the one we loved so dear to her eternal rest, she’s gone to heaven we have no fear, she is forever blest.” 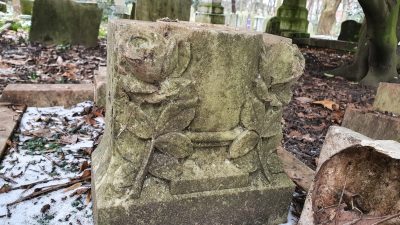 Roses found on a stone at the Cemetery Park – Feb 2021

As well as the inscription, there were also more decorative elements to consider when looking for symbols of love in burial places, each with their own meaning behind them. The Victorians loved symbolism and often drew on ancient cultures for inspiration (such as the Greeks, Romans and Egyptians) to decorate their memorials. Flowers also had their own special symbolism with each species conveying a different meaning to those who understood the language of flowers. For those wishing to represent love or beauty on their headstones, a rose was often used and many of these can found throughout Tower Hamlets Cemetery Park. Yarrow, honeysuckle or tulips could also represent declarations of everlasting love.

Other symbols included the clasping hands which showed the relationship between the person who had passed away and the loved one left behind and are often accompanied by words such as, “We’ll meet again”. The clasped hands also offered a symbol of hope for when the two would eventually meet again in the next life, and can be found used as a symbol of devotion as far back as the Roman period when it was used on burial urns that held cremated remains. 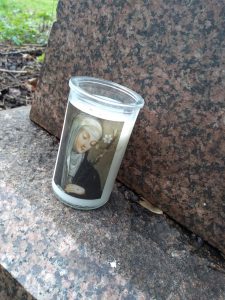 A religious candle left at a grave in the Cemetery Park, 2020

As a final note on acts of love in spaces of burial, it’s impossible to forget the mourners who visit and leave tokens of remembrance on the graves of their loved ones and tend to their burial places. People often leave tributes in the form of flowers, pennies and stones when visiting loved ones who have passed away, as well as cleaning and caring for them. In Jewish traditions, a visiting stone is often placed on the headstone or memorial of a loved one as a way of saying I remember you. In other cultures, fresh flowers are more traditional whilst unique items that represent the life of the person buried there may also be left in memoriam. This could be an emblem of their football team or a photo of their family members (although it is always important to check the rules of the cemetery before leaving non-biodegradable items on a grave). These objects, no matter how big or small, are endowed with meanings of love and devotion and again represent the loving connection between the living and the dead.

Next time you are walking through Tower Hamlets Cemetery Park, or wherever your local burial place is, perhaps take a moment to look for the representations of love and affection that you can find as you wander past the headstones, and remember the loving lives of the people who were buried there.